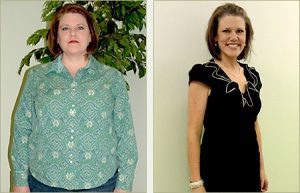 Nearly 3 years ago my life changed forever.  I work in the fashion industry and appearance is important.  My blood pressure and cholesterol were climbing and I was tired of being the fat girl in the room.

On January 25th, 2011 (size 20, weight 250+, height 5’8”) I had my first appointment with Dr. Croland.  Knowing he and his staff would be checking my weight regularly coupled with the financial commitment somehow changed me, something just clicked.  The drive I felt along with the medications and injections made for an unbeatable combination.

Dr. Croland started me on Phase 1 and told me to stay under 1000 calories and to eat 80-100 grams of protein each day.  I took it a step further and stayed under 700 daily calories*.  That sounds challenging, but truthfully after years of unsuccessful dieting it wasn’t bad.  The high protein diet really kept me from being hungry.

I was always good about working out and being active, but my diet was out of control.  I would try to diet and give up after a day or two.  I never saw results because I never stuck to it.  I convinced myself I had low blood sugar and had to eat.  Now I know the feeling was nothing more than being hungry and addicted to sugar.  Going through this process with Learn2Lose taught me two incredibly valuable lessons.  1) IT’S OK TO BE HUNGRY and   2) I WAS A SUGAR ADDICT.  I no longer crave sugar which is liberating.

One of the major achievements along the way came after weeks of frustration.  I was about 3 months into the diet, had lost 40 pounds*, and not a soul had noticed.  At the beginning I chose not to tell my co-workers and acquaintances that I was on a diet because I was afraid I would fail.  So after 40 pounds* and no one noticing I was discouraged, but kept it up.  When I got to 50 pounds* a couple of people said my face looked thinner.  What a letdown!  Really?  My butt didn’t look smaller?  So I decided it was time to buy a few new articles of clothing hoping that would inspire me to keep going.  Until this point I was resistant to shopping partially because I was afraid my size hadn’t changed much and partially because I didn’t want to waste money on clothes I wouldn’t wear for long before they were too big.  So my sister, a close friend, and I headed to the mall.  I found some Bermuda shorts I liked, grabbed a size 18, and headed into the fitting room.  I pulled them on and there was room for me and a small child.   I asked my sister to get me a 16 which in my mind was a major accomplishment.  She came back with a 14 and a 16.  I said there was no way I could wear a 14, after all I wore a 20 in to the store that morning.  She convinced me just to try.  I pulled them on and they were snug, but they fit.  I was SHOCKED and beyond emotional.  Getting in to a 14 was monumental.  No wonder no one noticed I was losing weight, I was still wearing the size 20’s and completely covering up the new figure I was developing.  I bought just a few key basics that day and a few more in each size as I continued to lose.

There were several things that helped me achieve success

I saw results right away.  The first month I lost 16 pounds*.  In 9 months I lost over 100 pounds*.  I averaged a little over 3 pounds loss per week*.  My second anniversary since completion of the diet is just around the corner.  I am still in a dress size 6 and 8 in most other items.  I continue to check in with Dr. Croland periodically and I’m determined to never be the fat girl in the room again!